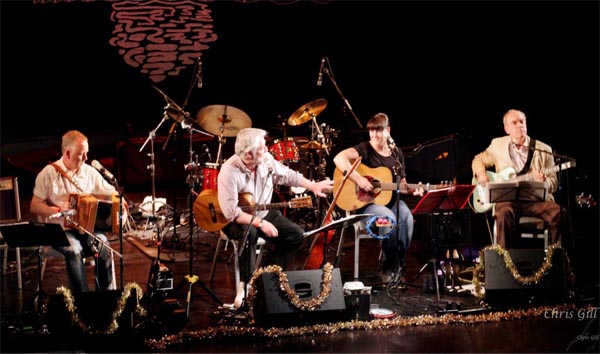 In association with Gulbenkian, Folk In the Barn presents Albion Christmas Band on Monday 21st December 2015 start from 19:30pm at Gulbenkian University of Kent.

The Albion Christmas Show has been attracting sellout audiences across the UK for the past 17 years.

Founder of Fairport Convention, Steeleye Span and The Albion Band, Ashley Hutchings is joined on stage by Folk superstars Kellie While, Simon Care and Simon Nicol, for an evening of traditional English Christmas music, dancing and celebration. Full of Carols, spoken word, humorous readings and dance, this show takes you on a guided tour through the Christmas customs of Britain.

The Albion Christmas Band evolved from special seasonal shows by the last incarnation of the Albion Band. On a suggestion from Simon Care, a previous Albion band member himself, Ashley ‘The Guv’nor’ Hutchings brought together two other previous Albion Band members to create an autonomous band to present a guided tour through the Christmas customs of Britain. These popular concerts feature a mixture of seasonal carols, spoken word, humorous readings and dance. The show is the antithesis of the ‘Christmas specials’ filling television screens, reminding audiences of the simpler pleasures and values of a traditional Christmas.

Gulbenkian is the University of Kent’s Arts Centre offering innovative, engaging and high quality arts activity for the public, staff and students. It provides a key role in delivering the University commitment to public engagement and has a particular focus on the creative empowerment of children and young people.